Barra received her name from the Isle of Barra in the Outer Hebrides off the West Coast of Scotland and her love of storytelling from her maternal grandmother, Abigail Jones Dangler. With a repertoire of over 5,000 stories Barra specializes in tales from the Celtic nations (Scotland, Ireland, Wales, Cornwall, Isle of Man, Brittany, & Spain). She also enjoys telling stories from other ethnic traditions as well as family stories of her own. 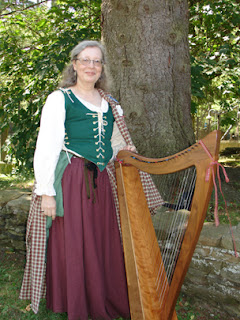 Barra holds a BS & MA in English Literature from Clarion University and has taught both Storytelling and Voice & Diction classes at the Community College of Allegheny County. She writes a regular column of Scottish folktales for Kilt & Harp, the journal of the Scottish Harp Society of America, and has contributed harp CD reviews and other articles to The Folk Harp Journal, the journal of the International Society of Folk Harpers & Craftsmen.
Barra's Journey So Far....

Many years ago, I was unhappy in my job. I'd been unhappy in a number of jobs I'd had since I quit teaching high school English a few years before that, and I talked half-jokingly about what I'd do when I grew up. Finally, my very patient husband got tired of this. "Why don't you go get some career testing and counseling?" he suggested, and told me that he had done that when he had changed careers before I met him.

So I called a local women's college, chose the "package" I could afford, received several tests in the mail, filled out and mailed them back, and a couple of weeks later went up to that college for a session with a career counselor. She gave me the test results and interpreted them for me. I was very empathetic and intuitive, she said; I should pay attention to my gut when making decisions, not simply my intellect. Then she did her best for 15 minutes to convince me that I should get into a career track with the goal of becoming the director of a non-profit educational agency.

Trouble was, at the time I was the administrative assistant for the dirrector of such an agency--and hated it, so I wasn't very receptive. After arguing about it for a while, she demanded, "All right, if you could pick any job in the world, what would you do?"

And from deep in my soul, to both our surprise, I heard myself say, "I'd be a bard."

Then I had to explain to her what a bard was. She did not laugh in my face, but it was clear from her tone that she thought I was crazy and unrealistic. By then our time was up.

The next day I went to what was then called the Workplace Room at the main branch of Carnegie Library here in the Oakland area of Pittsburgh, and dutifully looked up every single one of the job titles listed on the three lists she had given me, that I supposedly would do well and enjoy doing, my two main criteria. At that time, I believed that I could never successfully teach anybody how to do anything, ever. The lists had every level from nursery school to graduate....and once I had set aside those and anything that would require further schooling, or seemed too far-fetched, there was nothing much left. So I headed down the hall to the Children's Room to do some research of my own, and talked with Miss Jones.

And that was how I found out about the storytelling revial in Jonesboro, TN, and that there were actually two storytelling workshops in the area. Storytellers Unlimited met out at the Peters Township library, but, more conveniently, StorySwap, now Pittsburgh's storytelling guild, met on the third Thursday of every month at the Lawrenceville library on Fisk Street, which wasn't too far--and that was the following week.

I went home. John asked me how it was going. I didn't have the courage to say the "b" word (because I hadn't seen a non-pedal harp since my grandmother's when I was a little girl, didn't know if they existed or if I could learn to play one), so I took a very deep breath and blurted, "Whatdoyouthinkoftheideaofmybecomingastoryteller?" just like that, fast.

He has wonderful blue eyes. They began to twinkle. "Remember three years ago when we went to see the Folktellers?" he asked. (They were a tandem storytelling duo, cousins Connie Reagan-Blake and Barbara Freeman, http://www.storywindow.com/articles/laugh_makers.htm).

I nodded. They were wonderful.

"Do you remember what I said to you aferwards?"

No, oddly enough. I'm still living that down....

"I told you," said my beloved, "that the entire time, I kept visualizing you up on that stage doing just that. I've seen you with friends and family and at church events, and you just come alive when you're telling someone some anecdote. You are a storyteller! Go for it!"


With his help, I worked out a 10-15 year plan, and the next week, he came with me to my first StorySwap meeting. I clutched a Glengarry bonnet in my hand, borrowed from John, to use as a prop when I told my very first story. "Gramma, the Giant Piper, & the Root Cellar" would become my "signature" story. It went well, and I was hooked.