ClarSeannachie, "Tales with the Harp" 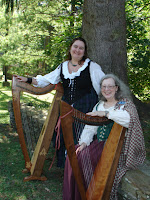 Linda McNair (formerly with the Celtic band Twisted Knickers) is a member of the Pittsburgh Scottish Country Dancers and the Harp Grove of Western PA. She won Harper of the Day at the Ligonier Highland Games 2004 Harp Competition, and was guest harper on the English country dance band Amarillis’ Irish Turlough O’Carolan CD in October, 2004.

Together, ClarSeannachie blends the music of the Celtic harp with traditional tales, legends, myths & poetry from the Celtic lands of Scotland, Ireland, Wales, & others from over the hills and beyond the salty sea to enchant and delight audiences of all ages.

Our most recent performance was at this year's Pittsburgh Tartan Day 2013 on Saturday, April 6th, at Bethel Presbyterian Church in the South Hills. It was  a busy day for us! First  Linda and her husband Arthur danced with the Pittsburgh Scottish Country Dancers at 11:45, then Linda and I were on the Sanctuary stage for our first harptelling set at 12:45, I will did a solo telling at 1:45, and we came back for our second set at 2:45. Tartan Day is a free event, jam-packed with Scottish heritage in the form of demonstrations, vendors, food, musicians and fun! Oh, and at 10:45, Melanie Sandrock brought some of her harp students from the Ringgold Middle School (the only Celtic harp classes offered as part of the curriculum on this level in the country, so far as we know--and these young harpers are successfully competing, so it was, as always, a treat to hear them perform! 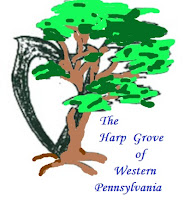 The Harp Grove of Western PA

Harp Grove is a group of Celtic harpers, based in Pittsburgh and southwestern Pennsylvania, a chapter of the International Society of Folk Harpers and Craftsmen (ISFHC) since 1995.

We meet the third Saturday of the month in each other's homes from 2 pm until around 5 or 6, when we have a break for tea, goodies, and talk, with lots of laughter. Mostly we play Celtic music, (Scottish, Welsh, Irish, Manx), with "party pieces" and a few forays into other musical genres. A highlight is our annual Holiday Party in December, when we play Christmas carols. A few times a year, we play out. Some of our members do weddings, some perform solo, or combine as duos, trios, or quartets in addition to the ensemble. We range from newbies to professionals; everyone is welcome to join us! Some members come from Erie or the Laurel Highlands; we have had members from Clarion, West Virginia and eastern Ohio in the past.﻿﻿

Almost all of us have had lessons at some point from Faith Stenning, whose dedication to the Celtic harp caused us to create the Faith Stenning Award. ﻿ 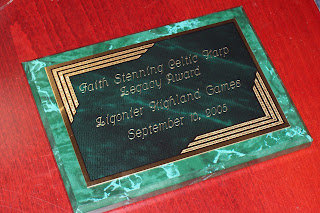 Its recipients have included David Peet, the former Executive Director of the Ligonier Highland Games, Dreama Powell, liaison between the Scottish Harp Society of America (SHSA), and Diane Bartels, founder of Harping for Harmony, a hospital harp program for sick children.

We are also the local sponsors of Harp Hoose activities at the Ligonier Highland Games each September (held the Saturday after Labor Day Weekend) at Idlewild Park on Route 30, outside Ligonier, PA in the Laurel Highlands. Activities include a harp workshop in the morning, a Scottish Harp Society of America (SHSA)-sanctioned harp competition in the afternoon, and various demos and sessions throughout the day. There is also a harp vendor; you can try out the models displayed! The Harp Hoose is to the right of the main bridge over the creek, open from around 8 am until 5 pm, and we provide a safe place to leave your harp if you want to visit some of the other wonderful Games' activities (such as Barra's storytelling at 2 pm under the red tent canopy nearby).
If you have ever wanted to play the harp, been curious about what it's like, wonder how to find and buy one for yourself, where to get lessons, or simply want to listen, please contact us! 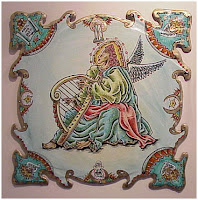 In November, 2010, Shelagh Collins, Soprano, and Barra, Harpteller, formed the nucleus of Oran agus Sgeul / Song & Story. We made our debut at a holiday party the following month at the Career Development Center in Squirrel Hill, and are the nucleus of a group which from time to time may include other musicians. Our next notable appearance was at the First Unitarian Universalist Church in Pittsburgh’s Oakland neighborhood for their annual fundraiser in March, when we sang “Old Maid in a Garret,” complete with a banjo-player accompanist and a surprise appearance. Currently, we are rehearsing an international program as a trio with Penny Perschal…and the name may change. Each of us brings a little extra; Shelagh sings, plays bodhran and banjouke; Barra tells, sings, and plays harp; Penny plays guitar, mandolin, banjo, ukulele, and sings.